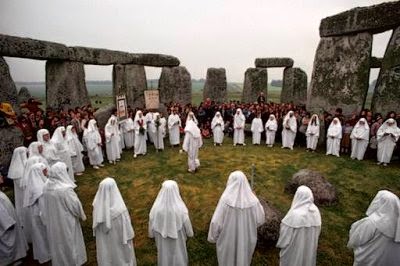 What a joy it is to bring you a new episode of “Heeding Haiku With …”. This week we will celebrate the Summer Solstice. This year the Summer Solstice will occur on June 21st around 7:00 PM. So that’s tomorrow evening. I love the thoughts around this festive day of summer and I have written several haiku about it.

As you know haiku finds its roots in Japan and maybe you know that Japan’s religion is Shinto. Shinto you can compare with what we call Neopaganism and as Neopaganism does is Shinto doing too … following the seasons and the festive moments of the new seasons, but in Shinto … the summer solstice isn’t often celebrated. Isn’t that strange?

The Summer Solstice is not celebrated much in Shinto, at least when compared with Neopaganism. This is a little surprising for two reasons. One is that Shinto festivals, much like Neopagan ones, tend to follow the astronomical calendar; the spring and autumn equinoxes, and even the cross-quarter day known as Imbolc in Neopaganism, are all commemorated in Japan. Even the winter solstice, Tōji, does not go unmarked in Japan, even if it is small-scale – the most well-known activity at Tōji is taking a bath with a type of citrus called yuzu in the water. Yet summer solstice, or Geshi as it’s called in Japan, passes relatively unnoticed.

The second reason why it’s strange for Geshi to pass relatively unmarked is that Shinto is very much a solar religion. The most important kami (deity) in the Shinto pantheon is usually recognised as Amaterasu Ōmikami, the Sun Goddess. She is traditionally considered the ancestor of the Japanese people (and, for many international Shintoists like myself, all people) and her main place of worship, Ise Grand Shrine, is perhaps Shinto’s most sacred site. The Sun is featured on the flag of Japan, and even the word for Japan in Japanese, Nihon or Nippon, literally means “Origin of the Sun.”

Considering how important the Sun is in Japanese culture, it seems odd that the Summer Solstice, the Sun’s longest day in the sky, is barely paid any attention in Shinto. The reason could be similar to why Japan doesn’t celebrate Easter, despite embracing other Western festivals like Christmas and Halloween: just as spring in Japan is already rather full of festivals, leaving little room for Easter, it may that be the Summer Solstice is eclipsed by the popularity of the huge number of other summer festivals, including the Tanabata “Star Festival” and Obon, the festival of the dead.

But that’s not to say that the Summer Solstice is entirely ignored in Japan. There is one spot in particular where it is celebrated – and that spot is not too far from Ise Grand Shrine. What’s particularly interesting about this spot for Neopagans is its similarities with Stonehenge, a site that also has strong Solstice connections.

The Meoto Iwa (“Married Couple Rocks”) are two giant rock stacks on the sea shore of Futami, Ise. The larger rock, measuring 30 x 131ft, is known as o-iwa (“male rock”), and the smaller one is called me-iwa (“female rock”). Unlike Stonehenge, these rocks are natural formations. But like Stonehenge, they have deep spiritual significance. They are linked by a huge shimenawa straw rope (which weighs over a ton and has to be replaced several times a year) and o-iwa is topped with a torii gate. Both of these things represent that the Meoto Iwa belong to the world of kami. Linked together in this way, o-iwa and me-iwa symbolise the primordial couple Izanagi and Izanami, the kami who gave birth to the land and other important deities, including Amaterasu.

It is at Summer Solstice that we can see the link between Meoto Iwa and Amaterasu. Around this time, the Sun appears to rise right between o-iwa and me-iwa, as shown in the photograph above. It is as if the Sun Goddess is born from the ocean surrounding the rocks – just as Amaterasu was born from the left eye of Izanagi when he purified himself in the sea after visiting the underworld.
The Meoto Iwa have been venerated in Japan for centuries; one print depicting the rocks bound by a shimenawa dates to the 14th century. It was perhaps this natural alignment with the rising sun at the Summer Solstice that caught the attention of ancient Japanese and inspired them to worship the site, just as the prehistoric Britons constructed Stonehenge in alignment with the Summer Solstice sunrise. And just like Stonehenge, the Meoto Iwa are the site of rituals at Summer Solstice even today. At daybreak, hundreds of pilgrims enter the ocean as the sun rises between the rocks in a ceremony called Geshisai – literally, “Summer Solstice Rite.” Participants of this ceremony are re-enacting the story of Izanagi’s purification, washing away all spiritual stains, imperfections and regrets they may have.

It is really inspiring to think that, a few hours before the thousands of Neopagans and other pilgrims gather at Stonehenge and other sacred sites all over the world to celebrate the rising Sun on June 21st, hundreds of Shintoists will also greet the Sun before the great rocks of Meoto Iwa. It reminds me that despite our differences in race, culture and religion, we are all truly children of the Sun, that same Sun that rises and sets over every nation, and gives light, warmth and life to all peoples and all creatures of Earth.

This week I love to challenge you to create a haiku or haibun (with a maximum of 250 words, including the haiku) themed “Summer Solstice”, inspired on the above text. (Source: http://www.patheos.com/blogs/pagantama/2016/06/14/shintos-summer-solstice/)

I will give you an example of a haiku written by Basho about the “shortest night” or the “summer solstice”:

And a haiku created by myself themed “summer solstice”:

This entry was posted on June 20, 2018 by Chèvrefeuille in Uncategorized.