So, behind this week. Sorry, about that. Time got away, lucky I had half of this post finished!

Going back this week with some David Bowie, a phenomenal artist and performer in his lifetime. I always liked this song, even though the ending’s sad. I’m going to give you two versions from YouTube, the David Bowie one, and the version sang by Canadian Astronaut Chris Hadfield during his time up in space. Enjoy! 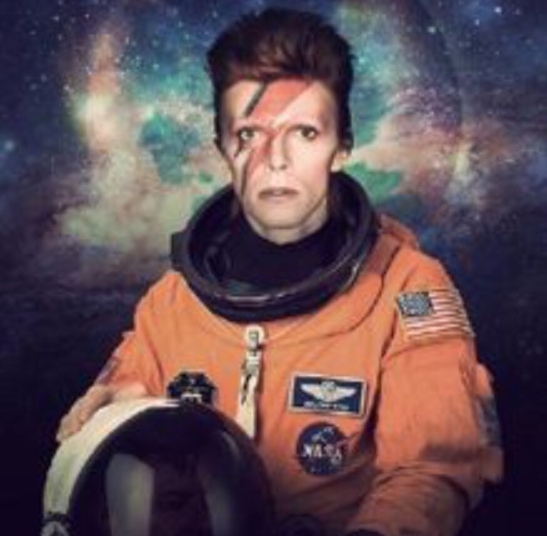 “David Robert Jones, (David Bowie) was bornJanuary 8, 1947, and passed on January 10, 2016.He was an English singer-songwriter, actor, and leading figure in popular music for five-decades. He was acclaimed by critics and fellow musicians for his innovative work. His career was marked by reinvention and visual presentation.

During his lifetime, his record sales, were estimated at 140 million albums worldwide, and made him one of the world’s best-selling musicians. He was also inducted into the Rock and Roll Hall of Fame in 1996.

Interestingly, he received a serious injury at school in 1962 when his friend punched him in the left-eye in fight over a girl. After a series of operations, and a four-month hospitalization, his doctors determined that the damage could not fixed.

Bowie was left with faulty depth-perception and a permanently dilated pupil. This injury gave a false impression of a change in his iris’ colour, and would become one his characteristic physical features.

Among many of his girlfriends and wives, Bowie met Hermione Farthingale, Choreographing dance scenes for The Pistol Shot, in the Theatre 625 series. They began dating, and she played acoustic guitar, forming a group with Bowie and guitarist John Hutchinson. They were last together in January 1969 for the filming of Love You till Tuesday, a 30-minute pro-mo that wasn’t released until 1984.

The pro-mo featured performances from Bowie, including “Space Oddity,” which had not been released when the film was made. On July 11, 1969, Bowie’s hit “Space Oddity” was released five- days ahead of the Apollo 11 launch, and reached the top five in the UK (Wikipedia.com).”

Use “Space Oddity”by David Bowie as a source of inspiration for any form of creative expression (including but not limited to short stories, poems, lyrics, artwork, photography, (etc.).

Do you think the following launch of Apollo 11 influenced the somg? Do you have memories related to Bowie’s well-known hit? How would you feel up in space like Bowie’s main character, or Chris Hatfield. You can always use pieces of the lyrics to inspire you as well. Anything goes, well, within reason. 🤭

and put your helmet on

and may God’s love be with you

This is Ground Control

You’ve really made the grade

And the papers want to know whose shirts you wear

This is Major Tom to Ground Control

I’m stepping through the door

in a most peculiar way

Am I sitting in a tin can

Far above the world

And there’s nothing I can do

And I think my spaceship knows which way to go

Tell my wife I love her very much

Here am I floating

round my tin can

Far above the Moon

And there’s nothing I can do.