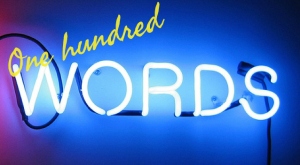 Welcome at a new episode of Heeding Haiku With Chèvrefeuille, this week it is time again for haibun. As you can read in the title … I love to challenge you to create a haibun with a maximum of 100 words including the haiku (or tanka).

It took me a while to give you a theme for this week, but I finally came up with something. I love to challenge you with the theme fantasy. I came to this theme through the new movie Fantastic Beasts and Where To Find Them.

This entry was posted on November 23, 2016 by Chèvrefeuille in Uncategorized.