Welcome at a new episode of Heeding Haiku With … Last week we had haibun-time and this week it’s time (again) for haiku. Haiku was my first love as I started several websites of my own. Through the years I started to grow and started writing tanka and other Japanese poetry forms next to haiku. Haiku is still my greatest passion but without my close friend and mentor, the Queen of Haiku and Tanka, Jane Reichhold, this passion is under tense depression. It feels like a writer’s block. I hadn’t expected this, because I am (how immodest) a strong person and always in balance. After the death of my dad (last March) and the passing away of Jane Reichhold (last July) my balance is starting to break down … it crumbles like the Berlin Wall …, but I think I have found the way to cope with this imbalance …
Recently I started a special Tumblr weblog in tribute for Jane Reichhold and this month (September) I have a tribute month for her at my personal weblog Carpe Diem Haiku Kai. Of course I can bring a lot of my knowledge and posts of my personal blogs here, but that’s not the way I think therefore I have chosen to be your host for Heeding Haiku With … here at MindLoveMiserys Menagerie.
I love being your host for Heeding Haiku With … and I am glad that I can share my knowledge and passion for haiku (and haibun) here with you all.

I am not a teacher or your sensei, but I am passionate for haiku. Haiku … the smallest poem I know is also the most complex poetry form I know. It’s certainly not easy to write / create haiku, because of all those rules and regulations, but … I think that we have to see haiku as the opportunity to share our deepest thoughts and feelings in the most simple words divided over three lines (or as the classical haiku in one line).

Recently I read Jane Reichhold’s “Writing and Enjoying Haiku” a hands-on guide to learn to write haiku. Jane made it very clear how we have to write haiku, but the one rule that hits me the most was … simplicity, saying it as it is. Or as Basho once said: “Learn from the Pine about the Pine”. 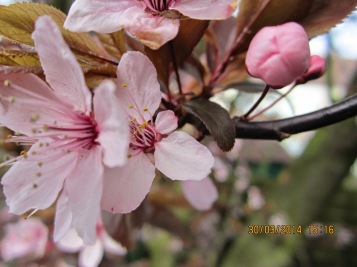 Look around you, “investigate” your environment, your neighborhood and learn from your environment, your neighborhood. See the simplicity.
This simplicity in the realm of thought and feeling appears as brevity in that of form. Silence is deeper than speaking; from silence springs speaking, and returns to it.
The brevity of haiku has its origin in the endeavor to appeal from the unconscious in one human being to the unconscious in others. It’s like talking with your beloved one without words. You and your beloved one don’t need words, your hearts beating together as one are doing the talking. You understand each other without words. That’s the kind of simplicity which is meant here.

Live your life as a child, see the world around you as a child as if you see it for the very first time and enjoy.

This is what I have learned from Jane Reichhold … see like a child and use all of your senses to bring the joy of a child, that simplicity, into your haiku. Try to create a haiku in which you use the simplicity mentioned above, as a child.
This is why I chose the title of this episode of Heeding Haiku With …”tribute to Jane Reichhold”. Without her I hadn’t become the haiku poet I am.

what a joy
the song of birds
a new day rises

This entry was posted on September 7, 2016 by Chèvrefeuille in Uncategorized.