Hello Folks … this is Paloma with the latest issue of B&P’s Shadorma & Beyond.

For this week I’d like to introduce the Huitain.  Originally, the huitain was a French form. It was popular in the 15th and 16th centuries.  Later, Spanish and English forms were developed. The French form is an 8-line stanza with 8 syllables in each line (huit et huit, or “eight and eight”).  The French / English rhyme scheme is either ababbcbc or abbaacac. The Spanish rhyme scheme is ababacac or abbaacca.

I used the Spanish scheme in this poem:

Woe to the kingdom, complacent!
Dark fairy’s spent years on her grudge
and from her harsh sport she’ll not budge.
We tremble now, Maleficent!
Sable wings: how magnificent!
Flaming breath: molten peridot!
In your cruel thorns we’ve been caught –
all for summons never sent! 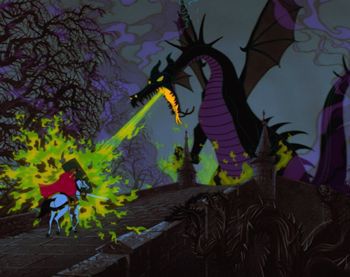 Maleficent as the Dragon in Sleeping Beauty, via Pinterest

Once you’ve written your Huitain or Shadorma please tag your post: Mindlovesmisery Menagerie and B&P Shadorma and Beyond then add  your link to the Mr. Linky App below.

Have yourself a great week!