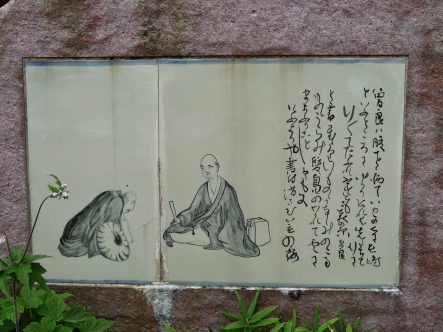 Oku no Hosomichi (a page from this haibun by Basho)

Welcome at a new episode of Heeding Haiku With … Last week it was haiku-time so as you know … this week it’s haibun time again. A haibun is a kind of poetry in which prose and poetry (poems) are entwined. One of the most well known haibun ever is without a doubt Basho’s “Oku no Hosomichi” (The Narrow Road into the Deep North).
At my daily haiku meme Carpe Diem this month it’s all about this wonderful haibun. That’s also the idea for this week’s Heeding Haiku With … episode.

I love to challenge you to write a haibun about a short trip, journey, you made. try to imagine how that trip was, remember the scenes and landscapes you saw and so on … Of course it has to be a challenge 🙂  so there are a few rules:

1. your haibun has a maximum of 250 words (including the haiku)
2. the haibun’s time is around Christmas (if possible)
3. try to “paint” the scenes which you saw

Not an easy task I know … well don’t make it yourself very difficult. If you don’t think you can follow the rules than feel free to shake the rules of. That would be very in tune with the spirit of Basho by the way. Basho once said: “Now you have learned the rules … forget them immediately”.

When you have written your haibun, please TAG Heeding Haiku with Chèvrefeuille and Mindlovemisery’s Menagerie. Then add your link to the Mister Linky widget below.

This entry was posted on December 16, 2015 by Chèvrefeuille in Haibun, Haiku, Heeding Haiku.