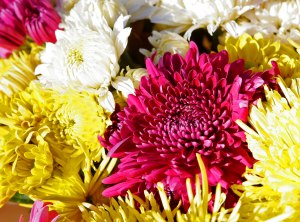 Another week has gone by. Time flies it’s like sand through your fingers. I had a very busy week, because I am preparing a very festive month for Carpe Diem. Next October Carpe Diem (my daily haiku meme) will celebrate its third anniversary and that brings a lot of work … but mostly fun.
This week’s “Heeding Haiku With …” I have chosen to inspire you all with a wonderful (classical) kigo Kiku or Chrysanthemum. Autumn is really the time for the Chrysanthemum and I have written several haiku myself inspired on Chrysanthemum for example this one, caught in a kind of haibun (prose and poetry).

My father in law has a wonderful basket full of Chrysanthemum in his garden. They are very colorful, yellow, orange, purple and white. A nice Autumn bouquet. I forgot to bring with me my camera, and I don’t have such a modern smartphone, as I was visiting him. If I hadn’t than I could have shown you this wonderful Chrysanthemum basket.

And another nice Chrysanthemum haiku from my archives:

And for closure of this episode of “Heeding Haiku With …” I have a wonderful haiku written by my master Matsuo Basho:

winter chrysanthemum –
heating sweet wine
in front of the window

Well I hope I have inspired you all to write haiku … have fun!

When you have written your poem(s), please TAG Heeding Haiku with Chèvrefeuille and Mindovemisery’s Menagerie. Then add your link to the Mister Linky widget below.

This entry was posted on September 9, 2015 by Chèvrefeuille in Haiku, Heeding Haiku.