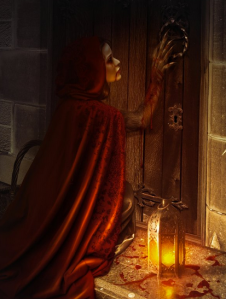 When we hear the word “fairytale”, we generally have certain stories or images that come to mind. I believe that typically consists of a Princess in some sort of trouble and a Prince comes to her rescue. There is often a darker side to many fairytales and I want to share one that I actually grew up hearing.

A quick run down of this story…..

A witch’s ugly daughter grows jealous of her step-sisters beautiful apron, so mother and daughter plot to kill the step-daughter. When the girls go to bed, the witch’s daughter is to lie near the wall, and the mother will chop off the step-child’s head as she sleeps. The step-daughter overhears this conversation, so when the step-sister falls asleep the beautiful sister pushes the ugly one to the edge of the bed, and lies by the wall.

In creeps the witch and chops off her own child’s head, then she goes to bed. The step-daughter then takes her sister’s dismembered head and drips the blood around the house; one drop of blood by the stove, one on the stairs and one by the bed – she then steals the witches wand and flees with her lover Roland.

In the morning the witch calls for her daughter and the first blood drop sings from the kitchen ‘’I am here warming myself’’, the second blood drop calls ‘’I am on the stairs’’ and the third calls out ‘’I am here by the bed’’. Then the witch finds her own daughters beheaded body lying in a pool of blood. In a rage, the witch puts on her many-league boots which can fathom a mile in an hour but when she catches up to the lovers, the girl turns her lover into a lake and herself into a duck.

The witch cannot entice the duck from the water, so returns home. The next day the girl turns herself into a flower in the middle of a bramble hedge and her lover turns into a fiddler. The witch comes by hunting for the lovers and spies the beautiful flower whom she recognizes as her step-daughter. As the witch reaches into the hedge to pick the flower, Roland begins playing the fiddle. The music is enchanted and the witch begins to dance around the bramble bush as the thorns tear at her clothes until she is naked. She continues to dance wildly round and round as her skin is shredded to ribbons and eventually she falls down dead.

Now…this is not the end to the story. More drama unfolds for Roland before she finally gets her “happily ever after”.
If you are interested in the full story…click HERE

Dive into the darker side of story telling and create your own fairytale where a step-mother causes trouble for the main character.

Remember with MindLoveMisery…write what and how you want.  If you want to write in fairytale style, then go for it. If poetry, haiku or even art is more your style, then please do that.  We want you to explore your imagination and try something that stretches your writing skills.

The prompt will be up for a week so once you are done writing, post it to your blog then come back here and go down to Mister Linky and add your link.

Enjoy and allow a little darkness into your tales this week.

“Creativity is more than just being different. Anybody can plan weird; that’s easy. What’s hard is to be as simple as Bach. Making the simple, awesomely simple, that’s creativity” – Charles Mingus
View all posts by Anja →

This entry was posted on April 4, 2014 by Anja in Childrens and tagged Brothers Grimm, darkness, fairytale, imagination, MindLoveMisery Menagerie, step-mothers.