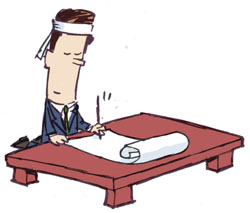 Let’s have a little historical dose first. The history of haiku can be traced back to the ancient Japanese poetry form renga or renku, which are collaborative poems with an opening stanza known as hokku. It was in 19th century that haiku got its name by which it is widely known today. Masaoka Shiki renamed the hokku to haiku as a standalone poem written by one.

The English Haiku has come out to be a popular form in the modern times. It all began in the 20th century when poets like Ezra Pound began writing hokku. Later, writers like Jack Kerouac and Richard Wright particularly popularized the form during the American Beat Period by writing the original haiku in English, like the way we know today.

Whitecaps on the bay:

In the April wind.

That is the basic introduction of how a Japanese poetic form found its presence in the Western culture and how it came out to become the form that many of us love today.

The basic rules for writing an English haiku are:-

1. Three lines, patterned in syllable count of 5-7-5. Though, they can be written in a single line. The idea of lines is to create a shift or to create a slight pause.

3. The presence of a season word or a reference to a season is an important component of haiku. It is derived from the original idea of including a Japanese kigo or season word in hokku.

4. The use of a caesura or a line break to compare the two images presenting in a haiku. It is a way of creating a relation between them.

For today, we will just focus on the first three rules. You may follow them or you may not follow them because I am a rule breaker myself. Moreover, haiku is one such form which can not be stereotyped by a fixed set of rules.

So, I would tell you a way of writing a haiku.

Writing haiku is capturing a moment. It is all about sensing the world breathing around you. If you pay attention, you can see the dance of a leaf as it falls down, the colours of the setting sun and inhale the scent of the spring air; and feel the goose bumps rise on your skin looking at the myriad of natural colours around you; and hear the concerto of the barking dogs. Go out, try to touch the sky, feel, sense, perceive, listen… and now write down whatever you see, feel, hear, and sense, all encompassed together in three lines.

And that is the prompt for you today. I am encouraging you to write a haiku for the prompt this time. We will leave writing a tanka for later on.

I am Anmol a.k.a. HA, hosting the haiku prompt today. You have seven days to participate and submit your links. You can write as many haiku in your post, as you would like. I’d suggest somewhere between 2 and 4. Also, you can submit more than one link as of now to the prompts, to the linking widget below. And if you can, visit the links of other participants and share your feedback about their creations.

You may also add the following tags to your posts: MindLoveMisery’s Menagerie and HeedingHaikuWithHA. Happy Writing. 🙂

I write poems, prose, and things that lie somewhere in between and beyond.
View all posts by anmol(alias HA) →

35 comments on “Heeding Haiku With HA: Free Writing To Nature”